The Assunpink “Daylighting” Project’s goal is to bring to the surface a portion of Assunpink Creek that is now flowing underground into a newly restored ecosystem in the heart of downtown Trenton, NJ. The City of Trenton has been working diligently with the Army Corps of Engineers and the New Jersey Department of Environmental Protection (NJDEP) for close to 20 years to demolish the block long culvert and open the Assunpink Creek to create a natural open space.

The challenges were many, including funding, the presence of utilities that needed to be relocated, negotiation of easements from the State of New Jersey, designs and redesigns, flooding challenges, historic significance (George Washington was here!), and of course, environmental issues. Despite many obstacles, the City persevered.

The City could not have taken on this massive project without many partners along the way. Working with the Army Corps of Engineers, NJDEP and the State Historic Preservation Office to come up with a plan and design for the site. 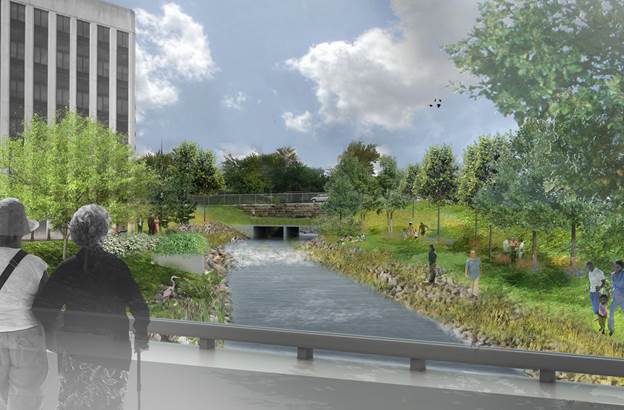 When in 2006, a portion of the concrete lid of the culvert collapsed revealing structural deficiencies in the culvert, efforts refocused on the daylighting project. With federal, state, and city funding engineering design work began. After the design and engineering plans were completed in 2015, the estimated costs had increased to the point where the project seemed untenable. However, the NJDEP was able to identify additional funds to meet the gap with federal funding to commit to this project, and the work was able to be bid.

The design of the site was kept in line with the historical significance of the area. In addition, archaeological monitoring will take place during the course of excavation in accordance with an approved monitoring protocol.

Thanks to the diligent efforts of the multi-level government team that was committed to moving this project forward, the contract has been awarded, and the contractor mobilized in November. The future of the site as an open space for the community is now becoming a reality.

To read more about the site and project, click here.